After the Christmas season, and with the new year already consolidated, Sitges begins to prepare for what is undoubtedly the most important and international party in town: the Sitges Carnival, one of the most popular in Catalonia and an event that never lacks the most daring costumes, fun until late at night and the catchiest rhythms by carnival groups that liven up the party.

If you're thinking of a getaway to Sitges and you want to enjoy the Carnival, in this post we tell you about the most important activities you shouldn't miss. 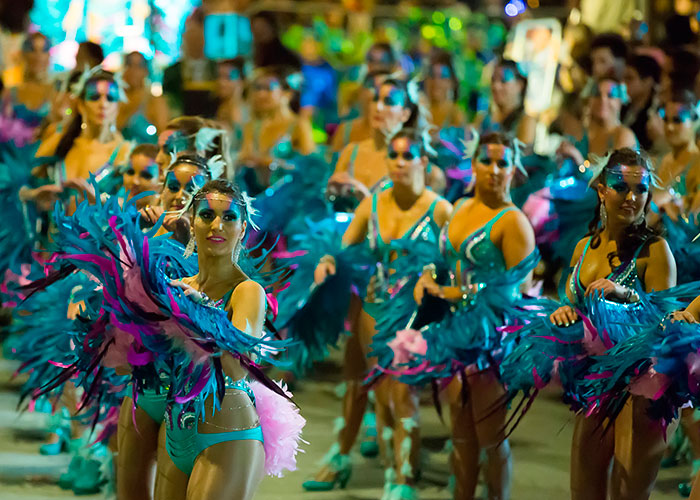 What is the Sitges Carnival?

Known as Carnestoltes in Catalan, the Sitges Carnival has taken place every year for almost half a century between February and March, and is one of the most emblematic in the country and the most famous and multitudinous in Catalonia. Music, dances, colors, costumes and good atmosphere envelop the streets of Sitges every year, in an event that attracts about 300,000 people each year.

However, to know the beginning of the history of the Sitges Carnival we have to go back a few more years. The Sitges Carnestoltes began to acquire relevance in the late 19th century thanks to the birth of the Societat Recreativa El Retiro (1870) and the Casino Prado Suburense (1877), cultural organizations that brought together those harmed by industrialization (El Retiro) and those favored by it (Casino Prado Suburense). From the confrontation between the two arose a certain competition in Carnival, since both wanted to show off to stand out against the other. From this rivalry was born the spectacular nature of the Sitges Carnival.

Our Carnival stands out for madness (disbauxa in Catalan), where no one is afraid to make a fool of themselves and fun and costumes come first.

When is the Sitges Carnival 2023 going to be held?

The best of this celebration can't be explained, it has to be experienced! So take note of the dates of the Sitges Carnival: it will begin on February 16, which will be Maundy Thursday, and will end on Wednesday 22, with the Burial of His Majesty King Carnestoltes (Ash Wednesday). With the participation in the various events of more than 2,500 people and 50 floats, it is expected to receive more than 300,000 visitors eager to enjoy all the events to the rhythm of music and festivities.

That is why booking apartments for the Sitges Carnival is the best option if you want to celebrate without worries and with total peace of mind. However, for non-residents, you can also get to the Sitges Carnival 2023 by public transport (although with the dependence of being subject to train and bus schedules) and, of course, by car. For those who plan to go to the carnival by private transport, it is essential to know where to park in Sitges in Carnival, as both public parking lots and blue zones are usually overcrowded.

The Sitges Carnival 2023 program features a variety of fun events that will mark the agenda of our town for seven days. The starting signal will be given by the arrival of His Majesty Carnestoltes. From this moment on, the Carnival will have different activities that will take place until the 22nd, the day that will close the festivities with the traditional burial of the sardine.

The most important events are:

As we said above, the Sitges Carnival 2023 opens with the first big event, which takes place on February 16th (Long Thursday) with the arrival of His Majesty Carnestoltes in the company of the Carnival Queen. A parade that kicks off a week of fun and that, as every year, begins in the Passeig de la Ribera and ends in the Town Hall Square with His Majesty and his entourage reading the famous "predicto" (or predicot) to all the inhabitants of the city at 8:30 pm.

Yes, you read that right, Sitges Carnival features this traditional race, where beds, pushed by each team, compete to see which one is the fastest. The race starts at 12 pm and is presented by the Carnival Queen and the Children's Queen. The King Carnestoltes, on the other hand, is in charge of closing the course.

Also on February 18, in this case in the afternoon, the Tequereque Festa (5 pm - 10 pm), a preamble to the big parades and rúas of the 2023 Sitges Carnival, will be held. In the afternoon, a batucada group will be touring the historic center of town, reminding everyone that on Sunday and Tuesday costumes and floats will be taking over the streets of Sitges.

Carnival Sunday arrives, the most important day of these festivities. The Rúa Disbauxa is a parade in which more than 50 floats and thousands of people in costume parade through the streets of the city. It is considered the largest carnival parade in Catalonia, with more than 3,000 participants: Color, music, good atmosphere, costumes and fun guaranteed.

La Rúa de la Disbauxa starts at 19 pm from the end of l'Avinguda Sofia, ending its route at the Cap de la Vila. Once this parade is over, the party continues both at the Casino Prado Suburense (Disbauxa Party) and at the Societat Recreativa El Retiro (Costume Ball).

In the morning, at 12 pm, the children's parade takes to the streets for the enjoyment of the little ones. A good opportunity to celebrate the Sitges Carnival 2023 with children. However, the highlight of the whole carnival is reserved for Tuesday night with the Rúa de l'Extermini, the event with the largest number of visitors and the most famous of the festivities. An unmissable event for those who want to experience the carnival at its peak.

Burial of SM Carnestoltes (burial of the sardine): February 22, 7 PM

As everything comes to an end, Ash Wednesday pays tribute to the death of HM Carnestoltes, the king of carnival, with the burial of the sardine. His coffin is carried through the streets of Sitges while the retinue of widows follows him, disconsolate, to the place where the will is read. With this act, the carnival says goodbye until next year.

As a gay tourist destination par excellence (Sitges Gay Pride is internationally known), the city also celebrates the Sitges Gay Carnival, which takes place four days before the official carnival program begins and continues during the celebrations mentioned above.

Pink Night, Mantillas Night, Tourists Night and Widows Night are just some of the special parties that are celebrated by gay bars and nightclubs in town such as Sauna Sitges, The Parade or La Locacola, among others.

From Sitges Group Apartments we hope you enjoy the most of this great celebration, and we will be happy to welcome you in our apartments. Make your reservation!