"Halloween" or "Castanyada"? Whatever you want, in Sitges

Autumn has finally arrived in Sitges, and we are looking forward to it. The trees are beginning to take on the brown, orange and reddish tones so characteristic of this season and the typical ingredients of this time of year are back: mushrooms, pumpkins, sweet potatoes, chestnuts, etc. October is also the month of Halloween, but here in Catalonia we have a festival of our own culture: the traditional "Castanyada". 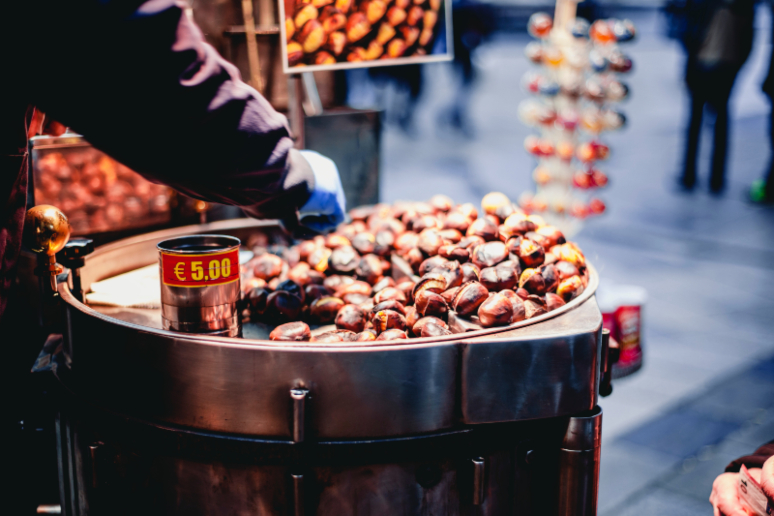 Despite being a season characterized by the logical drop in temperatures, we are not going to fool ourselves: in Sitges we love to brag about our microclimate and our more than 300 days of sunshine a year. The Garraf mountain protects the city and makes the temperatures drop, but not so much that we have to stay at home under a blanket (although it wouldn't be such a bad option).

Cold or not, the Castanyada and Halloween are two of the most characteristic celebrations of autumn. In this post we explain the origin of both festivities, and we recommend some plans if you have decided to spend the fall in Sitges.

What is the “Castanyada”?

Notice that smell in the streets? What's that smoke coming from the stalls on almost every corner? Autumn comes loaded with sweet potatoes and chestnuts (castanyes in Catalan). And these, precisely, give name to one of the most characteristic traditions of Catalonia: the Castanyada, also accompanied by the classic and delicious panellets.

According to the story, the tradition of eating chestnuts is closely related to the feastivity of All Saints, coinciding on the eve of this day: the night of October 31. Its origin dates back to the end of the 18th century. There are those who speak of funeral banquets in which this type of food was served while the family watched over the dead. Others, however, attribute this tradition to the bell ringers of the churches, who spent the whole night awake, ringing the bells, to warn the neighbors of the town of the arrival of the moment in which they could watch over their deceased. This was a hard task that required staying up all night and, for this, the bell ringers needed food to provide them with enough energy and to help them withstand the cold.

In short, the Castanyada is a night in which families and friends gather to eat roasted chestnuts, sweet potatoes, panellets (or “sweets of all saints”, marzipan-like rolls that were deposited in the tombs so that the deceased were nourished in another life) and candied fruit, all accompanied by sweet wine. However, during the entire month of October this festivity is already alive, in the streets you will find multiple stalls where you can buy chestnuts and sweet potatoes to combat the cold. You can not miss them!

Halloween, the scariest night of the year

Although the Castanyada is a deeply rooted tradition in Catalonia, the truth is that more and more people (also due to tourism in Sitges and other cities) choose to celebrate Halloween. A globalized party that, contrary to popular belief, does not come from the United States. Its origin is pagan and has its roots in the Celtic festival Samhain (“End of Summer” in ancient Irish) about 2,000 years ago. The Celts believed that on the night of October 31 the dead returned to earth. Legend has it that during the night of October 31, the door between the world of the spirits and the world of the living was left open. The ghosts and souls of the deceased took advantage of this moment to walk freely between both worlds.

Later, in the eighth century, this festival was renamed by the Catholic Church as “All Saints” or “All Hallows” and, therefore, the previous night, “All Hallows Eve”, became “Halloween”. Nowadays, children go out in costume to do the famous “trick or treat” by which they get candy by knocking on neighbors' doors, and adults go to costume parties or watch horror movies, among many other activities.

Nowadays, Halloween has become one of the most popular nights in practically all parts of the world, regardless of the religious or pagan character it may have had in its beginnings. It is one of the most famous celebrations and, despite not being typical of our country, is currently very popular in all towns and cities.

Sitges can not be less, especially considering that every year the International Fantastic Film Festival of Catalonia is held just a few days before, also in October. This means that there are many restaurants that offer special menus and scary nights, and many bars and nightclubs give discounts to people who go in costume on the night of the 31st.

Where to stay in Sitges?

Whether you like more the Castanyada or Halloween, come with your family or friends to any of our apartments in Sitges and enjoy this wonderful time in the city. You can start the day decorating pumpkins, stop to eat chestnuts and panellets, and finish watching scary movies or going out to have fun at a theme party. Do you dare to come?